Ohio is Withholding Justice for Some Married Survivors

To have and to hold does not mean, and should never mean, to own and abuse. Yet, this outdated notion of a woman being treated as the property of their spouse is a pandemic that still plagues our society; creating insurmountable barriers to justice under our current law. Although many states in the U.S. have already eliminated the so-called “marital rape” loophole, Ohio has twice failed to pass this proposed legislation in recent years. Nevertheless, determined policymakers and advocates are continuing the fight to enact this long overdue legislation that brings equal treatment under the law for married individuals.

Until 1975, “marital rape” without legal ramifications was allowed and justified by the widely accepted belief that women could not be raped by their husbands because sex is a part of their “wifely duties”. Fortunately, with pressure from the women’s rights movement, every state in the U.S. passed legislation eliminating the marital exemption and debunking this ancient notion, which is rooted deeply in rape culture and victim blaming.

Even with this monumental policy, over half of the 50 states still exempted husbands from prosecution despite the newly instated sexual offense clause. In Ohio, this loophole is still prevalent and excuses spousal rape when consent cannot be given due to the victim being impaired in some sort of capacity. This essentially means a husband is legally allowed to rape his wife if she is drugged, inebriated, mentally or physically incapacitated, unconscious, and even asleep.

House Bill 121 is the latest attempt to close the spousal exemption loophole for sex crimes in Ohio. The bipartisan bill, sponsored by Representatives Laura Lanese of the 23rd District and Kristin Boggs of the 18th district, garnered attention earlier this month as the House Criminal Justice Committee held a 2nd hearing for supporters of the bill to provide testimony. The legislation eliminates marital exemptions for the crimes of rape, statutory rape, sexual battery, gross sexual imposition, sexual imposition and importuning; providing equal protections under the law for married survivors and victims of sexual offenses and bringing Ohio’s laws into the 21st century. Lastly, the bill would allow for the victim to testify against their spouse during prosecution if they choose to seek legal recourse for the crime.

“Passing HB 121 is an opportunity to make impactful, systemic change. It will acknowledge the reality that domestic violence survivors are also sexual assault survivors, expand their available legal options, and hold offenders accountable for these criminal acts they choose to commit against people they claim to love. It will also help redefine healthy relationships, starting now and for future generations, resolutely declaring that love should not hurt, and that betraying the body and trust of another in this hateful manner is unacceptable, regardless of the legal status of your relationship.” – Tracy Grinstead-Everly, Chair of the Family and Sexual Violence Committee, National Council of Jewish Women, Cleveland Section.

While the Committee has completed its second hearing on the bill, there is more work to be done to finally pass this legislation into law. It is important to look at the data behind why this legislation is needed, and what the existence of this loophole means for anyone who decides to get married. Although spousal rape is statistically not as common, legal options should be available for those who are victims and survivors. The way that Ohio law is currently written, a victim or survivors who are married to their abuser cannot seek legal action in certain circumstances. Ohio House Bill 121 would address this current loophole in the law.

Statistics show that 33% of all adult sexual assault cases were committed by a spouse, boyfriend, girlfriend, or common-law partners. Additionally, 69% of all married rape victims are assaulted more than once. Although many fear and raise awareness for sex crimes committed by strangers, in 3 out of 4 cases, the offender knew the victim. So, when a woman is sexually assaulted by a familiar face, seeking lawful justice is oftentimes the only way for them to regain control in their lives. But what can a person do when that familiar face is the one they are legally bound to through marriage, and unable to seek justice under the law? 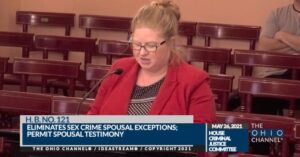 “In one instance, a 14-year-old pregnant girl married her 48-year-old boyfriend with the court’s consent in southern Ohio’s Gallia County, according to a Dayton Daily News investigation into child marriages.  While those marriages are now not lawful in Ohio, child predators can still escape punishment under existing Ohio law by just claiming marital privilege and exemption once married to their victim.” – Micaela Deming, Policy Director and Staff Attorney, Ohio Domestic Violence Network

Research estimates that 10-14% of all sexual assault cases fall under the category of “spousal rape,” but experts believe these statistics are drastically underrepresented. Although no victim’s journey should be trivialized, the legal impediments married victims are constricted by hinder them from reporting the crime at higher rates. With the exemption, a married woman cannot testify against her abuser, and is therefore already denied a greater possibility of justice before she seeks it. Moreover, the existence of this legislation reinforces the dangerous and outdated notion that rape within marriage does not exist.

“For victims and survivors of rape within marriage, the inability to take legal action can often be an insurmountable obstacle to even reporting the crime. As a consequence of this loophole, many women may not recognize that they have been victims of marital rape, or they may be cautious to question or resist unwanted sexual advances from their spouse.” – Erin Ryan, Managing Director, The Ohio Women’s Public Policy Network

During the June hearing, a notable testimony came from Heather McComas Harrison, a survivor of “marital rape”, whose harrowing journey to justice highlights the trials and tribulations victims face under the existence of this escape clause. After being repeatedly raped and abused by her husband, she was forced to lie to her children, family, friends and doctors about the origins of her wounds and her now missing tailbone. When she finally decided to seek protection under the law, she discovered that the loophole declares her husband is within his rights to commit these egregious crimes. Her story is just one of many real life instances presented at the hearing.

“I had a former client whose husband raped her, while making it clear that his intention was to impregnate her to trap her. It worked. She got pregnant twice via rape and was with him far longer than she would have chosen to be. She identified that pretty much all sex within their marriage was rape. In my work, I find that once ‘no’ is ignored, it’s less likely that someone will say ‘no’ next time. So, one instance of rape turns into coercion for future sexual encounters.”- Stacey Foster, SOS Clinician, LSS CHOICES

Consider the fear a woman must live with when the law agrees that even at her most vulnerable state, her body is not her own and her feelings are not validated. Envision the pain she must endure when a society expects her to choose her marriage over her safety and mental health. This is simply wrong, and it is past time for our law to stop treating married survivors differently.

We’ve internalized the timeless vows, “to have and to hold; in sickness and in health,” which signify the promise two individuals make when securing their “happily ever after”. As joyous or tumultuous as a marriage may be, the ultimate objective is to do everything you can to keep it from falling apart. Still, no spouse should ever confound their partner as their domain, and no spouse should ever be expected or legally bound to allow it.

“Changes to the criminal code happen when we decide as a citizenry that we do not accept certain behaviors in our society. Allowing this exemption to stay on the books tells all Ohioans that we accept spousal rape as within the bounds of socially acceptable behavior. This cannot stand. Ohio cannot continue to allow fears about false reporting, which is the exception rather than the norm, to deter essential changes to the law – changes that will improve health and safety for our entire population.”- Rosa Beltré, Executive Director, Ohio Alliance to End Sexual Violence

As a state, we owe it to survivors; to give everyone an equal chance at justice, regardless of whether or not they are married to their abuser. Many of the people reading this will have been lucky enough to have never experienced any of the accounts or be included in any of the statistics presented. However, this is an issue that many are forced to battle, and they may be doing so alone without ever seeking help – especially not if they are facing the legal barriers to recourse and justice. That should motivate our lawmakers to act swiftly to pass the bill and reshape this reality for survivors.

A third-year student this upcoming fall, Suzan will serve as an On-Campus Living Area Senator, Global Ambassador, and Co-President of the university’s African Youth League. Suzan grew up in Dar Es Salaam, Tanzania, enjoys traveling, and plans on pursuing a career in politics.